Signage as guests enter the attraction.
The looming sign of the ACC Salvation is the first indicator to guests that they are in a unique place. As they walk through various rooms of the cruiser ship they encounter the immersive environment of a much ‘lived in’ space ship. The walls of the general access corridor are lined with plaques indicating famous ‘historical’ dates in this fictional future in order to set the scene for guests. Starting with the first Albion Class Cruiser launch, the forming of Earth Chartered Systems organisation, the first fully functional off planet colony and finally, the first launch of the rescue ship ACC SALVATION. Guests also pass by the Recreation Room and Maintenance Bay II. Utilising a similar effect to Disney’s Space Mountain queue, windows will be present allowing guests to see out into space. Further immersing them in their ‘off world’ environment.

Aside from ambient mechanical noises in the background, voiceover announcements such as “Lieutenant Thaddeus, please report to Maintenance bay 3”, “All Salvation Engineers report to briefing room with Lt. Webb.” Will sound over the tannoy. Guests finally reach a door marked ‘Briefing room’ and will wait for a cast member to assist them. A themed countdown clock will be present at the door indicating to guests the time until the next show begins. 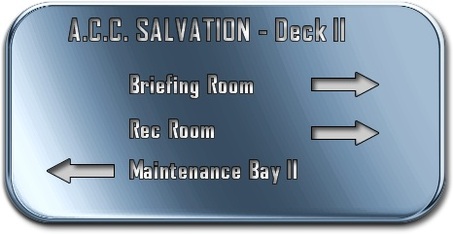 Theming around the ACC Salvation queue area
Video Breifing: A cast member greets the new recruits and ushers them into the Briefing room. Video screens disguised as holographic images show neighbouring star systems and mechanical blueprint schematics of various ships and components. Two rows of benches are present in the room with a main video screen at the front, brandishing the ACC SALVATION logo.

Once everyone is seated and the doors are closed. A host/hostess will give a short speil.

HOST: “Welcome engineers to the ACC Salvation. I hope you got some good rest on your journey from Earth, because you’re jumping into your first assignment.  Captain Webb will now brief you on your newest assignment from the flight deck.”

The host/hostess then begins the show. Lights dim and the screen brandishing the Salvation logo bursts into life.  Footage from the Salvation Bridge is shown with Lieutenant Webb stood at a control booth in the foreground as well as a few crew members working in the back ground.

WEBB: “Welcome new engineers, to the worst assignment you’ve ever had. I hope you’ve prepared yourselves for next to no sleep and a similar amount of gratitude. As Engineers of the ACC Salvation, we’re going to be travelling to the far reaches of ECS Space repairing the various vessels and stations and helping out their inhabitants. “Which brings me onto our newest client: Orcus Corp, I’m sure you’ve all seen their commercials “searching for the future that you deserve”. Manufacturers of LCC Starships and terraformer equipment.

The Orcus Corp logo is shown on the edge of the screen.

“And I’m sure you’ve all heard about their CEO Hadrian Wells.”

An image of Wells is shown on screen 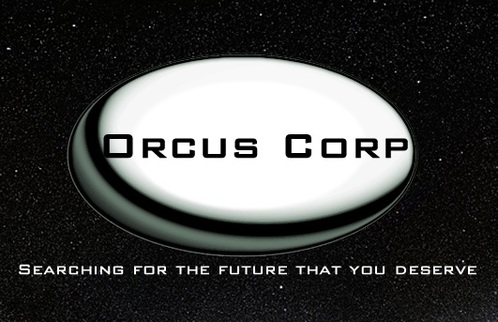 The Orcus Corp logo, complete with patronising corporate tagline.
“Descendant of illustrious businessman Amadeus Wells, who started the company in 2002 nearly two hundred years ago, Hadrian is now the third richest man back on Earth. (If you ask me it’s probably because he’s as crooked as a dog’s hind leg). Hadrian has recently been putting more effort into the exploration of deep space, with some whispers that he is obsessed with contacting alien life. All rumours of course but it seems to fit. The guy is obsessed with ancient gods and myth.”

Which brings us on to his latest creation, and our new mission. The space station Terminus IV. Originally a mining platform that has been transformed into a full working research station, Terminus is one of the largest stations in existence. Official ECS documentation states that the station is purely for black hole research on the edges of explored space, but I have my doubts. “

“Comms have gone silent aboard Terminus IV save for one distress signal that was sent one standard Earth week ago. Take a listen.

An audio clip of a distressed sounding man’s voice plays over the video. The clip is fully of static and hard to hear.

MAN: ‘Haven’t seen another human being for days now, think there’s no one but me. The strain have claimed the rest. Shouldn….Minerv….she’s gone…….I hear them…….coming for me………..”

WEBB: “That’s the last we’ve heard. The normal procedure to send a distress signal is to contact the ECS Government who will then send a response team. They however have avoided this route and have contacted us directly, which suggests…well”

“We’ll be nearing Terminus IV’s sector shortly, where you will take a landing shuttle to dock with the station with Lieutenant Thaddeus who will be leading this mission. He’ll be piloting the shuttle to Terminus IV and will be in charge of the rescue operation. Now we still don’t know exactly what we’re dealing with out there, so make sure you do exactly what he says, stand where he tells you to and only touch what he tells you to. Primary mission objectives are to run a damage assessment on the station and connect to the stations Artificial Intelligence system ‘Minerva’. She will hopefully shed some light on the situation so that you can make the required repairs to systems to get that baby running again, in the event that the station is too far gone, your objective will switch to getting the crew safely evacuated off the station, remember the ACC Salvation motto: Rescue, Repair, Restore. Human lives always come first. Now get yourselves to the Response Shuttle and prepare to disembark. And remember; keep a cool head out there. Something isn’t right at Terminus IV. In my experience bad things happen on the far reaches of the universe. Good luck engineers”.

If the timings are all correct from a show control point of view, the previous group of guests will have exited the simulator from the other side, making room for the new guests to climb aboard and begin the experience. 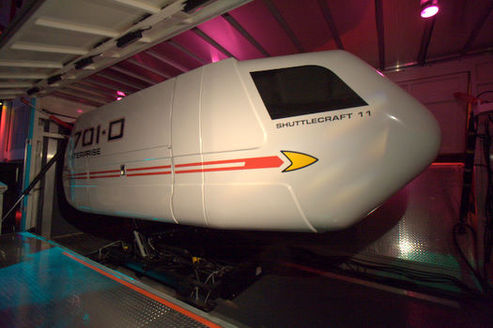 A standard themed 10 seater motion simulator.
Guests are seated in the small 10 seated simulator which acts as the rescue shuttle of the Salvation. Lieutenant Thaddeus is in the cockpit piloting the ship (just voiceovers). His face is concealed by a flight helmet which also muffles the sound of his voice.

THADDEUS: “Welcome aboard. Hope you all took your sickness injections back on Earth, zero g’s can be a real kick in the gut. Don’t worry though, this thing may not look like much, but it’ll get us where we need to be…and back if we’re lucky.”

The screen powers up which and we can see the cockpit view. Thaddeus can be seen sat in the pilots chair, he is wearing a flight helmet so we cannot see his face.

Captain Webb appears on screen in the top left of the cockpit.

THADDEUS: “Didn’t think you were into the whole long distance relationship idea Cap?”.

WEBB: “For you, the longer the distance, the better.” 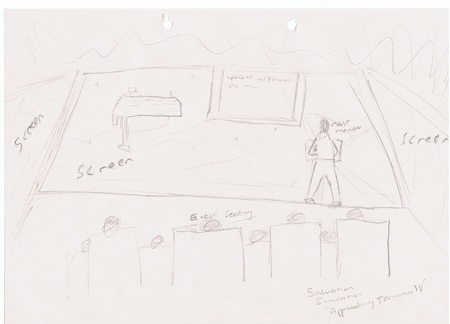 A very early sketch of the Simulator scene.
The shuttle powers up and the cockpit controls light up. The ship coasts into to a chamber marked ‘Airlock II’.

THADDEUS: “Let’s go save some lives shall we?”

Thaddeus initiates the launch of the shuttle and we leave the Salvation. A rear view image in one of the monitors gives guests their first look at the ACC Salvation from the outside. In front of us – nothing but space.

He punches a switch and the shuttle lurches forward into hyperspeed, the shuttle shakes accordingly.

He hits another switch and the shuttle moves back to normal speed. Guests now see a large gas giant planet infront of them. Thaddeus docks to the rightand  the massive and ominous space station comes into view. It is just a silhouette at first in front of a glowing red sun, but as we near the behemoth, details begin to take shape in the station.

“There it is, Terminus IV. Orcus Corp’s dirty little secret. Seems in good shape to m…”

With that a piece of metallic debris brushes past the ship, shaking it violently. Thaddeus takes evasive manoeuvres as another hurtles past.

THADDEUS: “What the hell was that? Was that part of the station?”

He hits the controls. 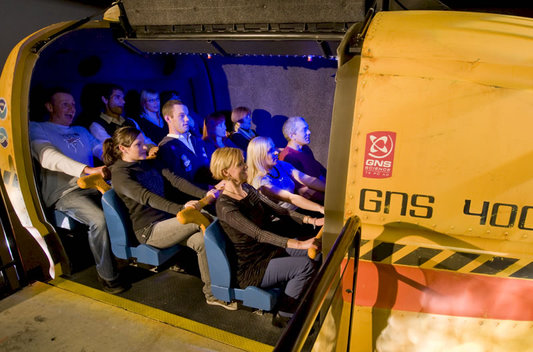 A quick shot appears on screen. Of what appears to be a corpse sat at a control console. Although if you blinked you probably missed it.

THADDEUS: “did you see that? Looks like we’re going to have to let ourselves in. I’ll override the hangar bay doors”

Thaddeus taps on the controls as we approach the now massive space station. Details appear on the station now as we pass the massive hull. The words TERMINUS IV in massive writing.

The shuttle banks towards the back of the station and nears the hangar doors.

THADDEUS: “got it, not the welcome I was hoping for, but were making p”

Thaddeus is interrupted by what appears to be a body hitting the cockpit. Half a body. Blood is floating around the corpse in zero g.

THADDEUS: “What the hell?”

The body makes a crack which causes red lights to flash inside the ride vehicle. A warning voice is heard.

THADDEUS: “Bloody hell, we’re dog meat out here, I’m taking her in. Hold on to something!”

Thaddeus guides the shuttle into the hangar, narrowly missing other flying objects with evasive manoeuvres. We eventually enter the massive hanger. The shuttle hits the floor with a massive crash.

Just as the countdown hits zero Thaddeus presses a button to seal the hangar airlock. Air pressure is restored to the hangar. Thaddeus turns towards guests

THADDEUS: “I’m almost embarrassed, not my best landing. I’ll meet you outside, lets find out what the heck is going on in this heap.”

The cockpit doors slowly close. Just as they do guests can briefly see something moving in the distance outside the front of the ship. 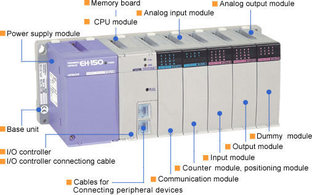 A Programmable Logic Controller (PLC) would control the Simulator
The simulator would be a standard 10 seater Motion Simulator themed to look like a futuristic shuttle from the outside. The only modification required would be to add an extra door so that guests would enter the simulator from one side and then exit out of the other into an entirely different themed space. This will allow guests to feel like they have been transported over a huge difference from the ACC Salvation to the space station TERMINUS IV. When they in fact would have only traveled a few feet.
The simulator would be controlled by a standard Programmable Logic Controller (PLC). A CG video film would need to be produced for the simulator footage and the motion of the simulater would need to be engineered to match the footage exactly in order to prevent motion sickness.
To the next scenes:
The Walkthrough