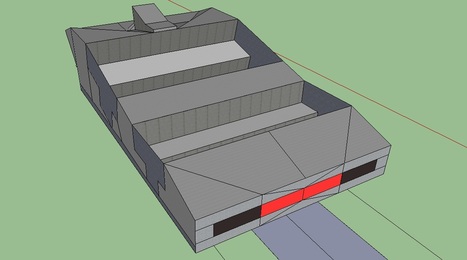 A 3D CAD model of the ride vehicle.
Guests have somehow managed to escape the Atrocious nest, and are rewarded with a wonderful site. The escape pod.  As well as another survivor.

The survivor loads the guests onto the ride vehicle and explains that the pod must be launched manually. The survivor heroically volunteers to be the one to stay behind. Isn’t that nice.

Once seated and launched, the 'escape pod' moves through a tunnel with flashing red lighting - kind of reminiscent of the tunnel in Space Mountain. We hear Captain Webb. Over the intercom.

WEBB: ” Salvation crew this is Webb! Thank god. What’s happening in there? Where’s Thaddeus? Damn just you made it. I’m taking control of this thing, I’m going to get you out of there”.

The vehicle speeds up slightly through the bowels of the ship. We hear sirens wailing. A voice over the sound system warns: “Warning, Station self destruct sequence initiated. You have 2 minutes to leave the area.” 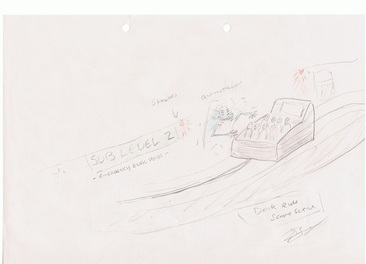 An early sketch of a scene from the ride
The ship passes several labs. The scenes are grizzly, Whilst a strobe only illuminates the rooms briefly every few seconds, blood can be seen all over the rooms with bodies strewn about. One room shows an Atrocious (animatronic) feasting on a corpse with it’s back to us. We then pass through a utilities area where the vehicle is surrounded by pipes. A rumble is heard in the distance and the pipes surrounding the vehicle rupture and drop, spraying mist at guests as the vehicle passes.

The vehicle continues down through the station. One scene shows the shadow of a creature lurking about (in a shadow effect similar to the velociraptor shadow in the Jurassic Park River Adventure at Islands of Adventure).

“60 Seconds until self destruct”

We reach an open room. Another siren goes off, accompanied by another warning “Caution, breach in airlock Delta 2, leave room immediately”. To the vehicles right the scenery rips into an opening showing space behind it (a screen). A wind effect simulates the air escaping through the rupture. The vehicle halts and begins to drift towards the breach in the ship. This is done by having the vehicle stop one the spot and then rotate just short of 90 degrees to the adjoining track that leads off into another direction to create the sensation that the vehicle has ‘drifted’.

A CAD model of the ride vehicle passing through scenery. 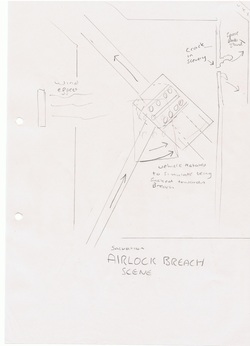 A plan of the 'airlock breach' effect.
WEBB:” Hold on, I’m powering up the thrusters”.

The vehicle then lunges forward through to the next area.

This then leads us to the finale of the attraction. Ahead of us lies a large creature. Guests eyes have a difficult time making out what the mass in front of them is until a light shines on the creature. A giant mother alien animatronic shrieks at the vehicle, as it helplessly follows the track towards the vehicle.

WEBB: “That wasn’t in the Orcus commercials! Look out!”

The creature swipes at the vehicle with its large tenticles. It seems to have taken over the room with a black substance that is connected to the monster. The vehicle narrowly avoids the creature as it lunges forwards (on a small runway). By the way, that flash that you just saw was your picture being taken, hope you smiled.

“10 seconds until self destruct”. 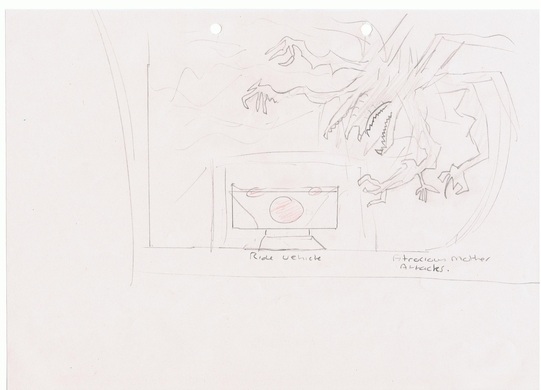 Sketch of the 'Mother Atrocious' animatronic attacking the ride vehicle 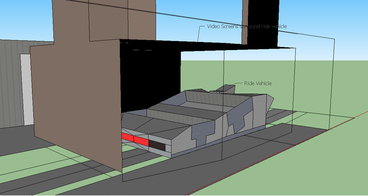 The finale - The ride vehicle is surrounded by the projection screen
For the finale of the attraction I needed to come up with a way to simulate the escape pod leaving Terminus IV and travelling through space to the safety of the ACC Salvation. Taking some inspiration from a trick used in Poseidon’s Fury (Islands of Adventure), I came up with the following ending:

The vehicle travels into the final room where it becomes surrounded by a dome shaped screen. The video screen shows a projected video simulating the escape pod exiting the space station just as it self destructs. The escape pod briefly travels through space before reaching the ACC Salvation’s docking bay. The motion on screen would be matched by the tilting movement of the ride vehicle. The challenge here is to have the vehicle come to a standstill whilst still convincing guests that the vehicle has continued to move from physical sets to the video screen. 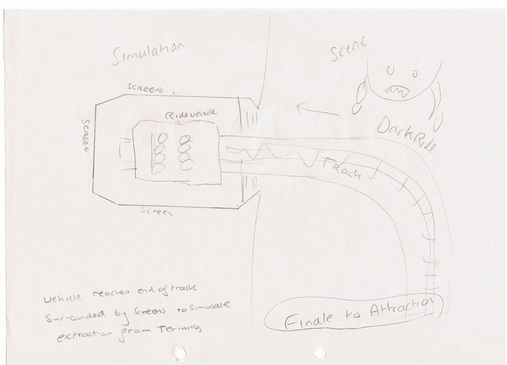 An early sketch of the finale to the attraction

Another angle on the finale
A flash of light occurs and the room is plunged into pitch darkness. As the guests sit in darkness (further dazed by the light flash) the screens are lifted up to the ceiling by mechanical arms. The lights return to the room to reveal a physical set of the docking bay. An LCD video screen is above the doors now facing the guests showing Webb in the bridge of the Salvation.

WEBB: “Welcome home engineers, I can’t believe you made it. You weren’t the only ones too.”

Engineer 426 shows up on the screen next to Webb. He wears the same costume as the actor who guided guests through the attraction, but he is wearing an engineering helmet yet again with a slightly muffled voice.

ENGINEER 426:”You don’t want to know what I had to do to get out of there. I’ll debrief Captain Webb, we’re going to make sure Orcus Corp pay for what they have done.”

WEBB: “Go get some rest crew. You’ve certainly earned it. Although try not to have nightmares.”

This is where guests exit the vehicle and the attraction itself. One emptied, the ride vehicle proceeds through the doors to the load area, ready for the next set of guests.

Congratulations, you have survived the horrors of Terminus IV!

More images of the 3D Ride Models can be found HERE

The ride system would be controlled by a PLC
In terms of the dark ride itself. Due to the throughput of Salvation probably being around 8-10 guests per group every 5 minutes, there isn't a need to have more than one ride vehicle moving through the actual ride at any time. With a second (and maybe third) in the load/unload processes. Block Zones would therefore only be needed in the unload/load area. Only having one vehicle in the attraction at any one time significantly reduces the safety risks and ride control engineering complications. In terms of the ride vehicle itself, I designed a pretty straight forward 8 seater dark ride vehicle that runs on a track, with the ability to tilt both horizontally and vertically at its base. The dark ride would be controlled using a Programmable Logic Controller (PLC) A theme park ride standard such as this would do the job perfectly, synchronised to the environmental effects and animatronics as well as the audio/video aspects of this ride.

Audio: The dark ride vehicle would feature on board speakers which would convey much of the audio such as the tense music soundtrack played in this segment as well as the voiceovers of Captain Webb and the Terminus IV announcer. Themed/hidden environmental speakers would be strategically placed externally around the ride for the creatures, pipe ruptures and the breach in the airlock etc.

Special Effects: A fan would blow towards the ‘breach in the hull’ to create the effect of air being sucked out of the room. A screen simulating space would be placed behind the wall that ‘breaks’ to simulate space beyond the ‘hull of the ship’

Animatronics: The animatronics in this section include the creature feasting on the scientist in the lab. This guy would have pretty basic movement with ‘eating’ sound effects. Two creatures would attack the vehicle in the narrow corridor, shrieking at guests. And the final large ‘Mother’ animatronic. This creature would look as though it is holding onto a great section of the room with various arms moving. The head itself would lunch towards guests (timed with the vehicle on the right segment of track) to create a final scare in the attraction.