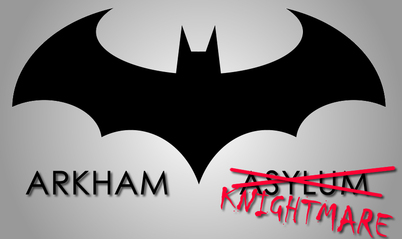 "Welcome to the madhouse - Now let's get this party started"

How about a horror maze attraction based on the popular 2009 video game 'Batman: Arkham Asylum'? In my opinion the game does not only perfectly capture the dark world of Batman, but creates one of the most detailed environments I have ever had the pleasure of exploring, filled with small details and Easter Eggs. And features some of Batman's more terrifying characters (The Joker, Scarecrow, Mr Zsasz and Killer Croc) as well as stunning sound design and art direction.

Here's a story treatment I wrote describing how I would translate this story into a linear walk through horror maze environment in the vein of a Universal's Halloween Horror Nights house.

Scene I. Welcome to the Mad house

Universal's wonderful entrance to "Psychoscarepy" provides inspiration to the entrance to the house
Guests enter the soundstage and find themselves in a impressive set of the exterior of Arkham Asylum, the large menacing gates, surrounded by trees and accompanied by a sign that states “hitchhikers may be escaping patients” provide an unsettling welcome to the Asylum. A projection screen at the top of the building just above the Asylum façade shows a dark sky illuminated by the Bat Signal.

As guests pass under the gates and get their first look at the dilapidated gothic architecture of the Asylum. Lights flicker from within and shadows move across the windows creating a sense that guests are being watched.  Forced perspective allows the structure to appear much taller than it actually is. To the left of the entrance the Batmobile is parked up, is the Dark Knight somewhere within the Asylum? An Arkham inmate is stripping the vehicle and hurling abuse at guests such as “you crashed the wrong party” and “I hope you’re ready for some fun” “The Joker’s got big plans for you” Guests head through the door marked ‘Intensive Treatment’… 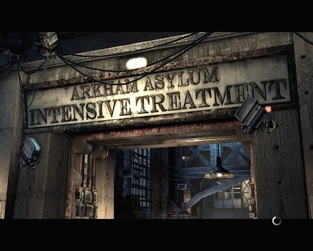 Guests enter the Asylum and are greeted by a portrait of Warden Sharpe, the portrait however has been given a spray painted smile and Joker style green hair. As guests proceed into the room they see a television screen which shows looping footage of The Joker greeting guests and welcoming them to ‘Joker Asylum’. “Come on in! We’ve got room for all!” He explains that he has taken over the Asylum and has ‘big plans’ for this place. He also makes jokes about Batman. “If you see any pointy eared lunatics perched around, feel free to put a bullet in him, and then one in yourself for that matter!” Just past the TV screen an inmate appears to be unconscious on a wheeled restraint (Hannibal Lector style) He however jumps out and gives a scare to passing guests. Guests then pass through the security scanner, a narrow passage with windows on either side. Every so often an alarm and red light flashes and Inmates appear at each side, banging on the glass to startle guests. Guests then continue into the Cell Blocks.

Guests are now in the heart of the Asylum, walking through broken scanners and into a corridor lined with prison cells. The first on the left contains a psychotic inmate quietly crying to himself. This misdirection allows a second on the right to startle guests with a hysterical scream as he lashes out at guests. This continues as we continue down the hall. As guests reach the end of the hall they are startled by an Arkham doctor being held by Victor Zsasz who is carving tally marks into her flesh, occasionally lashing out at guests with the large butcher knife.

This small scene brings guests into the Asylum infirmary. A sign on a desk states that "you don't have to be crazy to work here, but it helps". Injured doctors provide startles complimented by their attackers, inmates wielding various surgery implements getting really up close and personal with guests. Keen eyed Batman geeks will notice a whiteboard with a surgery schedule mentioning Dr. Thomas Elliot (better known as the villain ‘Hush’). Guests head through a door marked ‘Morgue’.

The first sign that something is wrong with this scene is the scent. A scent will be sprayed into the area to represent the Scarecrow fear gas to make guests instantly uncomfortable. The joker appears on above monitors asking guests why they feel so uncomfortable? We are in the morgue, as guests pass down a long corridor Bugs appear to be crawling on the walls. This would be done through simple lighting tricks (think of it like a giant creepy disco ball). The next room is the Morgue itself, body draws line the walls and pneumatic pumps allow certain draws to slightly open and close making simple startles for guests. The scares come in the form of a Ghostly Martha and Thomas Wayne who appear from the various nooks in the room. As guests finally leave this nightmare room, Scarecrow appears and provides a startle.

Guests are now in what appears to be an outdoor environment despite being still indoors. We are now in the graveyard, trees and gravestones (including that of Amadeus Arkham) are present in this environment. A feral inmate appears to be feeding on a dead guard’s corpse. Guests head through an entrance marked ‘Botanical Gardens’

The Botanical Gardens have been overtaken by giant mutant plant life. Vines move up and down along the walls warning visitors not to get too close. A smell of chlorophyll fills the air. The attacks begin to come in thick and fast by ‘plant posessed’ guards clearly not acting under their own will. The more we progress into the beautiful but deadly gardens, the more grotesque and ‘plant like’ the guards become. Guests leave the area through a door marked QUARANTINE: CATEGORY 3 INMATE. 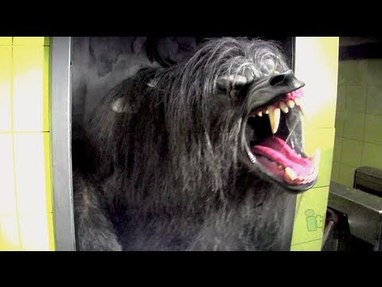 Proof that puppets can be terrifying

Guests have stumbled into the Lair of Killer Croc. Skulls line the walls of this sewer environment. As guests make their way through this labyrinth a chilling voice shouts lines like “I’ve got your scent!” and “I will rip the flesh from your bones!” Guests are startled by inmates who cry for help, they’ve been slashed to ribbons by what could only be Croc. As we head towards the end of this chilling environment the main scare comes in the form of a large Killer Croc puppet – very much in the same vein as the wolf attacks from the American Werewolf in London maze at Universal’s Halloween Horror Nights. Strobe lighting and very loud sounds enhance this effect from a mere puppet to a terrifying assault on the senses. 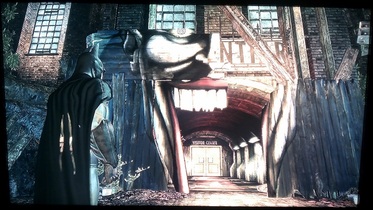 You finally made it to the party. And guess what, you’re the guest of honour! The large wooden Joker façade that looks as though it was created in mere hours looms overhead as an inmate with a ‘guest list’ and party hat greets guests and allows them inside. What lies ahead is a line of inmates taunting and scaring guests as they pass through the intimidating corridor.

Through the door lies a large throne atop a pile of disjointed mannequins. Sat on the throne is the Clown Prince of Crime himself…The Joker. This awesome sight is just the perfect distraction for a large Titan monster (in full costume) to provide a startle to passers by. Guests head towards the exit, with one last surprise as the Joker jumps out and provides one more scare. Congratulations, you’ve survived Arkham Asylum.

It's worth noting that I chose NOT to feature Batman himself in the attraction. Whilst this decision may be disappointing to some guests visiting the attraction, the reason for this was two fold. The first reason is that I don't want guests feeling 'safe' by seeing their hero in the maze.  The second reason was to immerse guests into the attraction by making them feel like they themselves are facing the villains and criminals in the maze (and not just watching Batman fight them himself).
​
Batman created by Bob Kane, and characters, logo and settings are property of Warner Broters Entertainment Inc.