For my 30th Birthday in March 2018, my wife surprised me with a trip to Rome. Here's the GoPro we shot over three days, with a written diary below. Highlights included visiting the Colosseum, Roman Forum, Vatican City, Trastevere, The Pantheon, Trevi Fountain and more.

Whilst the scale, complexity and finish of the rockwork was both beautiful and awe inspiring – especially to a theme park guy like myself- I found the surrounding street to be rather oppressive and quite frankly was ready to move on after a short while. Well worth seeing though. Having been in Italy for a few hours, we were of course desparate for Gelato and stopped at a small place just adjacent to the fountain named Gelateria Valentino, where both the array of flavours as well as wonderful customer service from the owners impressed us to no end. Bellies slightly full, and heads full of suger, we walked the back streets some more until we stumbled upon the awe-inspiring Pantheon. It had started to rain at this point, but we were prepared with umbrella in hand. Heading in through the Corinthian columns we were greeted by a behemoth of a building. Protected by a huge circular concrete dome roof 143 feet above our heads (with a hole in the middle, letting in the rain). We spent some time studying the altars, sculptures, frescoes as well as the tomb of Raphael (my favourite Ninja Turtle) and others that lay nearby. 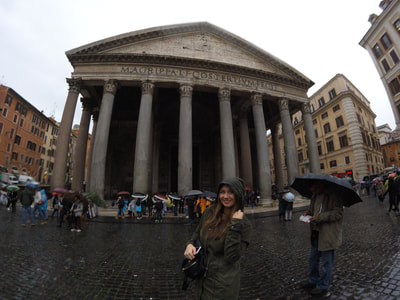 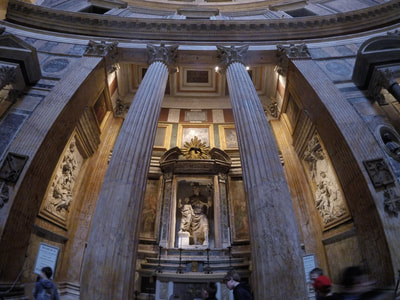 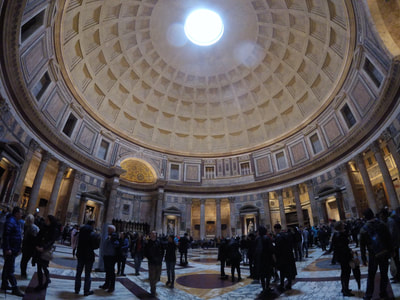 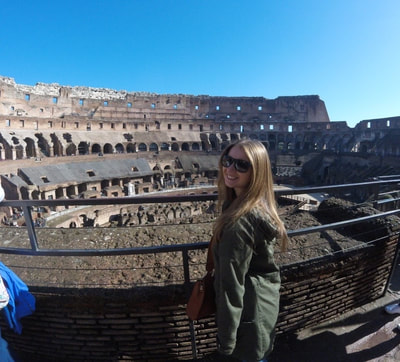 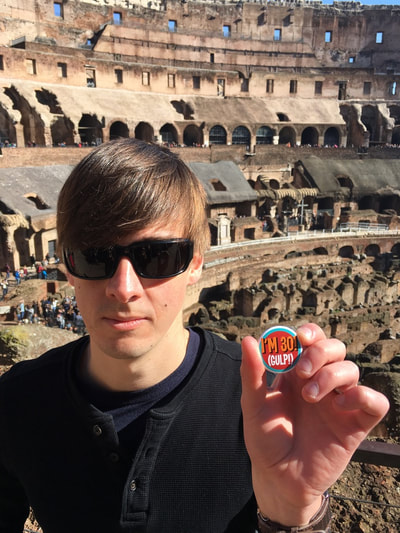 A particular highlight for us was the exact spot where Julius Caeser was cremated. Under a small metal struture in the middle of the Forum lay a mound of dirt with flowers atop. Jen and I knew we were walking amongst some of the World’s most important ancient history. I had goosebumps. Another chilling moment was reading about the House of Vestral Virgins. The virgins lived in this place for a 30 year term in chastity, however if any virgin broke this vow, they would be paraded through town (strapped to a funeral car), given a loaf of bread and lamp, and then be buried alive. Tough break for a cheeky shag! I always find it fascinating how even the most advanced civilizations on Earth can still be home to some rather barbaric acts.

Just a small portion of the massive Roman Forum
After many hours exploring the Roman Forum and filling our water bottles up at the many water fountains situated around the site (Rome is full of safe to drink water fountains), we made our way up to Palatine Hill. Exploring this magnificent ruin and catching a great view of the Roman Forum below on one side, and the Chariot Racing track on the other side (of Ben-Hur fame).

We’d done some serious exploring and our feet were starting to shout at us, we ambled back to our hotel via Gelateria Valentino (by Trevi Fountain) the owner took incredible care and pride in the way he scooped our gelato, and then asked us to try it and ensure we were happy before paying. The passion was beaming from him and the gelato was well worthy of his pride. I’d seriously recommend this place. 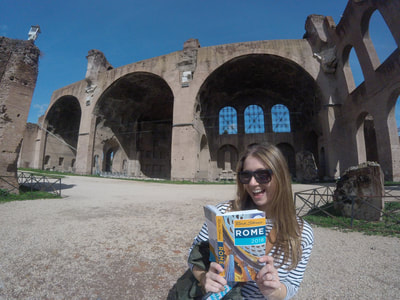 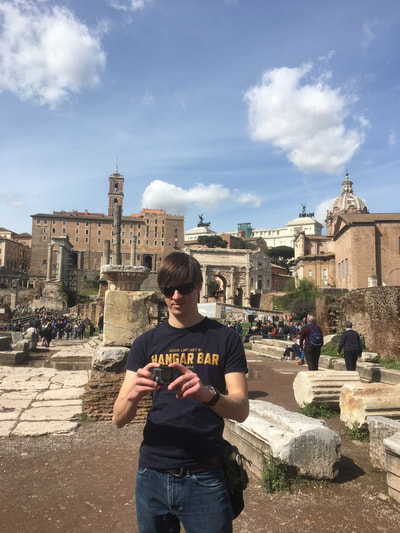 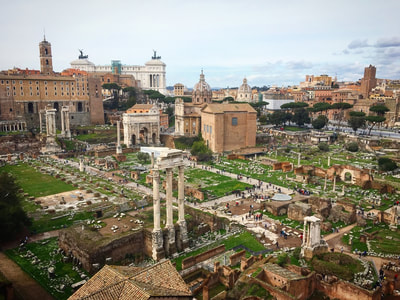 ​We both slept amazingly well and awoke at 7:45am to head down to breakfast.

Today we were heading over to Vatican City to visit the Vatican Museums (which we had pre-booked online) We hired a taxi to take us over there. The driving was just as crazy as I remembered it from my last visit to Italy (“no red lights, just very dark green”). We arrived to see massive crowds already queuing around the walled city towards the entrance to the museums. We were very pleased that we had booked ahead and once our time slot approached, we headed inside and upstairs into the main Atrium, surrounded by renaissance architecture and featured a 2,000 year-old Pinecone statue (honouring Isis - the Egyptian Goddess of Fertility) and large bronze sphere. 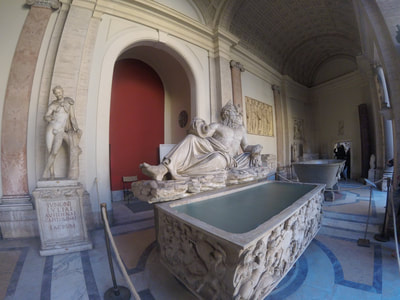 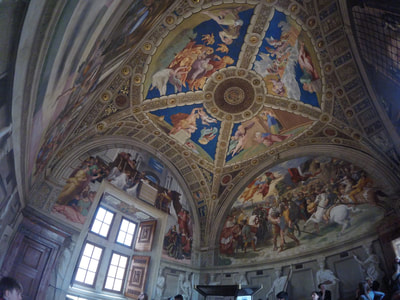 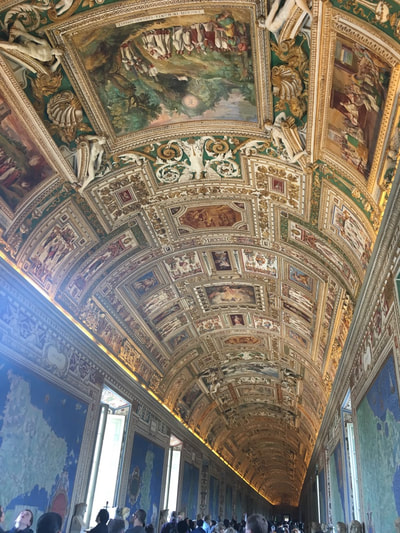 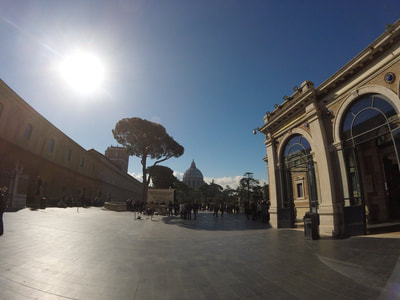 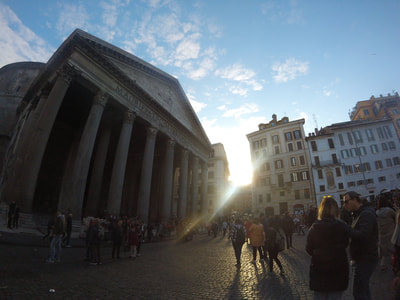 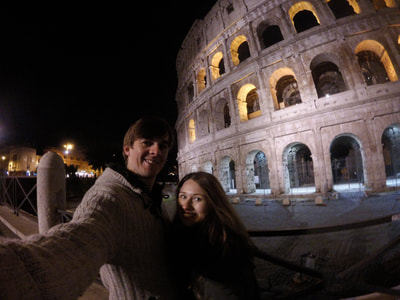 Using the guidebook which highlighted a lovely walk we could do through the Trastevere, we spent a few hours taking in the sites of this quaint and almost weirdly quiet neighbourhood. Highlights included some beautiful narrow backstreets that just screamed ‘quintessential Italy’ as well as some beautiful Christian churches such as the Church of Santa Maria and the Church of Santa Cecilia. I'd definitely recommend this area for a stroll. We were there in the morning, but as we left the bars and restaurants were starting to open their doors, giving the sense that Trastevere would be a fantastic place for a meal if we had more time. Sadly, we didn’t. 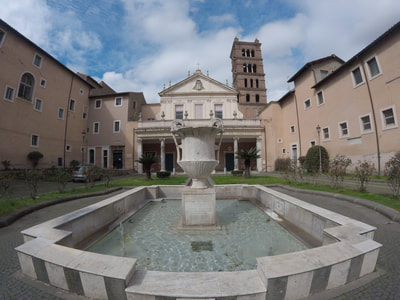 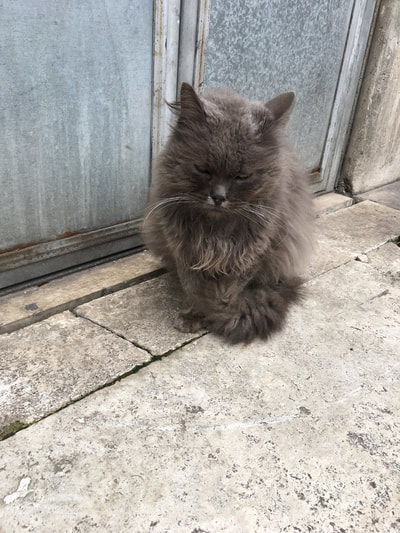 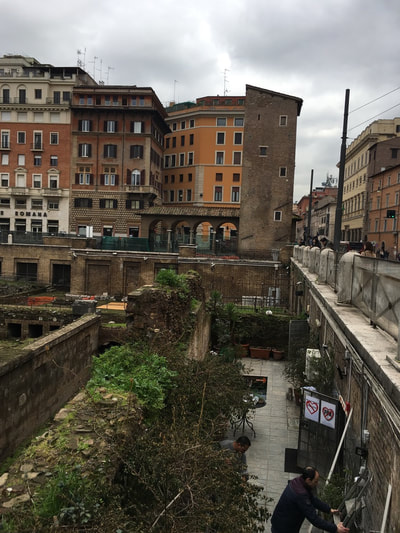 As a huge fan of the Italian culture, history, cuisine and language it is weird that Rome was never on the top of my list of ‘places I desperately want to visit’. I think this is partly due to the fact that it is a very busy touristy town. However upon visiting this wonderful city with my wonderful wife, it’s obvious why this place is so popular. The lovely people, mouth-watering food, mind-blowing history and general charm and character that this City is home to make it a must-see place to visit.

I couldn’t think of a better way to leave my twenties behind and begin the next decade of my life. So thank you Jennifer. You constantly surprise me in the most wonderful ways. Here’s to our next adventure!