Some people say you should never meet your heroes. But more on that later.

I can’t specifically remember my first interaction with one of Stan Lee’s co-creations, although I have seen photographs of me as a boy no older than four dressed as Spider-man (my older brother stood proudly next to me as DC’s Superman, kiss-curl hair and all). I also remember a day (I was maybe six?) when that my mother brought home a Spider-man cartoon on VHS. It contained three episodes where Spidey faced off with Dr Octopus, Dr Doom and the Lizard – I remember it clear as day.

From around age twelve I discovered the wonderful world of Marvel Comics, first discovering X-Men, then Spider-man and The Avengers. I was hooked and have been a Marvel ‘True Believer’ ever since. The action has always been dynamic and exciting, the universe rich, and most importantly, the characters wonderfully relatable and real. Peter Parker’s constant determination to do the right thing and never give up in the face of impossible odds and immeasurable challenges has always particularly inspired and stuck with me. In fact, at time of writing this, I’m 30 years old and still get my Spider-man subscription delivered to my door every two weeks. I often look at it on my doormat, shake my head and think to myself “grow up”.

In recent years I’ve been lucky enough to have felt Stan Lee’s reach all over the world, from the excited kids in the Middle East I once queued with for an Avengers ride at Dubai’s IMG Worlds of Adventure theme park, to a small comic book store I wandered into whilst on a business trip in Istanbul that was packed to the rafters with Marvel comic books, action figures and posters, to a little boy in England I saw on the news in 2017 who wore a Spider-man costume in hospital because it – in his words - made him feel brave (a story that brought me to tears when I read it on BBC News).

There was however one personal encounter I was unfathomably fortunate to have with Stan. A moment where he proved to me that whilst sometimes a controversial figure, he was every bit as decent, warm, likeable and welcoming to his fans as I was led to believe.

In the Summer of 2009 I was interning for an entertainment website in Beverly Hills, California. Most days myself and my fellow interns would venture out into the area to grab lunch. On one particularly sunny day in July after much debating, we decided to eat at a place called Jack ‘n’ Jill’s down North Beverly Drive. I’m pretty sure I wanted to eat at a nearby Mexican restaurant that day but reluctantly went along with the group’s decision.

We walked into the busy place and my eyes were instantly drawn to the table where a familiar face was sat having lunch with a colleague. It was Stan Lee. I instantly started sweating as we were seated on a table nearby. The girls I was interning with had little interest in who he was but could see from my reaction that it was a big deal to me. I decided it would be rude to bother him whilst having his lunch. The girls however convinced me it would be less rude if I maybe spoke with him outside.

Stan got up to pay his check whilst enjoying a lollipop the restaurant had given him with the bill. I drifted passed him and waited outside. He eventually left the building with his colleague (who I suspect now actually may have been his brother Larry Lieber. But I could be wrong).

“Excuse me”, I meekly uttered.

He turned around and looked me up and down through those large tinted glasses he was famous for wearing. It was at this point that I realized that I had absolutely no idea what I wanted to say to him! I blurted out the first thing that popped into my mind.

“I’m sorry to bother you in the street like this, but I just wanted to say that I grew up reading your characters in comic books and I truly feel that they’ve helped make me the man I am today. So, thank you”.

I instantly cringed, how could I say something so incredibly cheesy?! I waited for his response through a wince and beads of sweat. Would it be a laugh? A look of pity? Even an insult? Two seconds felt like two months.

But no. Stan Lee simply looked at me, smiled, gestured towards me and said a single sentence in that oh so iconic voice of his. A sentence that will stay with me until the day I die.

“Well, then it looks like I did a pretty good job!”

We shook hands, I once again apologized for stopping him in the street, we said our goodbyes and parted ways. I went back to my lunch and explained what just happened to the other interns whilst shaking uncontrollably. My pizza had already arrived whilst I was outside, but quite frankly I was too stunned, amazed and nervous to eat it.

In some ways I’m sad I didn’t ask for a photograph with him (the truth is, I didn’t have a camera with me that day) or an autograph as a keepsake of the encounter that I could use to help remember the moment or show off to anyone who might care. But to be completely honest I’m mostly glad that I didn’t. He owed me absolutely nothing and whilst I did briefly interrupt his day, it was simply to let him know - for what it’s worth - what a profound effect his work has had on my life and to thank him for it. I’d like to think he appreciated it, he certainly at least acted like he did.

The memory of how personal, intimate and random the encounter I had with him was is also what made it so special to me. I’m certain Stan forgot about that moment shortly after it happened, but it has stuck with me as one of my most cherished memories since that day and likely will do for the rest of my life.

I just thank my lucky stars that the other interns ignored my suggestion of eating at that Mexican joint just down the road on that beautiful July afternoon in LA.

They say you should never meet your heroes. I disagree entirely. If you ever get the chance, you should meet your heroes, providing that you have chosen them wisely. Stan Lee was a testament to this and for that, I shall be forever grateful.

Rest well Stan. To me you are an even bigger hero than the ones you created for us. Thanks for the brief cameo in my life. 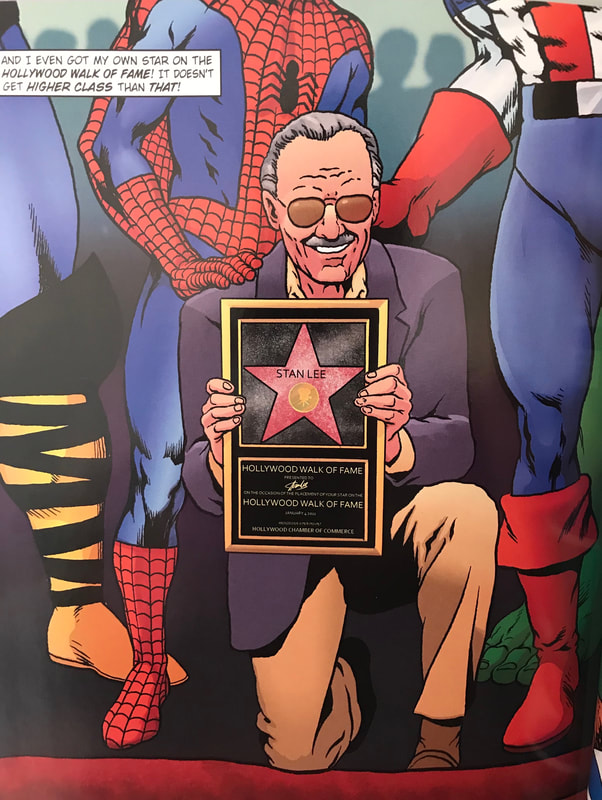