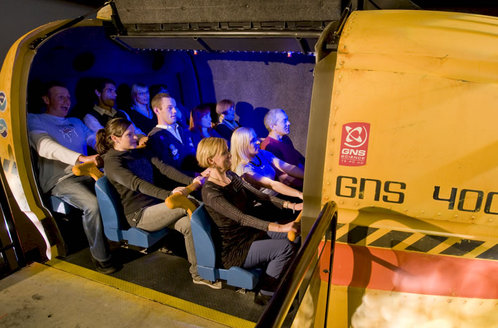 SALVATION is my love letter to both themed attractions and science fiction...

I’m a big fan of walk through attractions, immersive themed environments and dark rides with animatronic creatures.  So I wanted to design an attraction that combines all of these elements into one experience. I am also the kind of person who really tries to get into the ‘role’ that a ride puts us into as guests. I try to convince myself that I am now the Daily Bugle’s newest recruit or I am actually on that training Mission to Mars. I then, started to think about an attraction where the guests could actually play a part of the attraction. I came up with the concept of SALVATION where guests progress through the attraction and are presented with a series of rooms, most containing a task that will be completed by a guest(s) to progress through to the next set piece.

In SALVATION, Guests form part of a rescue team (of groups of 10 or less) sent to a troubled space station in the far reaches of space. They are guided by cast members who will be with them throughout the experience to progress the story and instruct guests on what to do/where to go. Guests arrive at the station to find that something terrible has happened (surprise, surprise!) and must progress through a series of rooms to restore the stations systems, save any survivors, find out the truth behind the event and – ultimately- escape. There would however be creatures stalking the rescue team and appearing at certain points throughout the attraction (a mixture of costumed actors and animatronic elements)

The attraction would have a beginning, middle and an end. Start with a simulator to erm…simulate the crew arriving at the Space Station, the main middle section as a walkthrough attraction where guests experience a series of rooms, each with a show piece and certain rooms contain tasks for the guests to complete. The experience reaches its finale with a short dark ride. It would last around 30 – 45 minutes. Logistically this would be achieved by having rooms filled systematically. As one group is guided out of one room, the next would arrive shortly after.

I originally planned to have a ‘challenge’ in each room and have one guest do each challenge. Throughout the blue sky phase I realised that this wouldn’t work too well and wouldn’t provide a fully satisfying experience. I therefore reduced the number of tasks and altered the remaining tasks to include all guests.

I don’t see this as a Scare attraction, just an attraction that has scary elements. Therefore I would be looking to target Families and young adults (although probably not targeted to under 12’s). Also, the physical aspect of walking through the attraction probably wouldn’t suit the elderly. Attractions with similar aspects exist (especially in the UK) such as the ‘Dungeons’ (London, York etc.) and the long deceased Alien War (google it!) but I feel the ‘hands on’ approach offers a unique difference. I think this idea also has the advantage of possibly having sister attractions with different themes: A capsized ship, secret military lab etc etc.

The opportunity with this kind of attraction exists to create sister attractions at different locations allowing people all over the country (or multiple countries) to experience Salvation. The story for Salvation allows for scenarios in present day as well as the distant future. I imagine the Salvation to have beginnings in modern day as a rescue and salvage outfit rescuing stricken ships etc. (which could be a location for a sister attraction). It is also mentioned in the attraction that ORCUS Corp began in the early 21st Century which means they could be the focus of a present day set sister attraction. This allows for opportunities in other media such as Comic books or video games to stem from this brand and turn Salvation into a potential media franchise.

"My name is Hadrian Wells, and I welcome you to the periphery of our very existence in the Universe. Welcome to Terminus IV.” 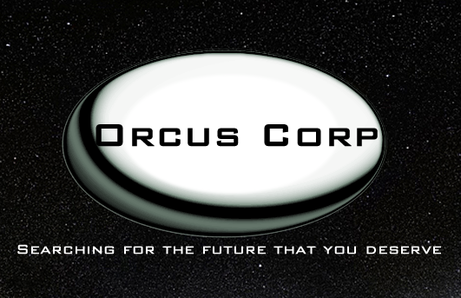 After overcrowding and lack of resource threatens most of the world. Humans inevitably reached out to the stars for answers. The various merging governments of Earth set about searching for planets that contain fuels and other combustible resources. Much of the exploration is done through private corporations who specialise in Colonisation/Terra-forming of planets, Exploration and research.  This new business is strictly policed, with each corporation having to gain Government approval for all new missions/colonisations. One such company is Orcus Corp. Rumors have existed around Orcus’ CEO, Hadrian Wells taking an interest into the contact of Extra terrestrial life – believing that this is the key to human survival in the Universe. However nothing has been proven. Orcus – like many corporations own numerous Space Stations and Ships in different Solar Systems in the Earth Charted System (ECS) for research and exploration purposes. Each Station contains an Artificial Intelligence interface known as Minerva (named after the Roman goddess of wisdom). Who aids the Captain/Crew of each station.

Further rumours suggest a secret Research Station operating outside of ECS reach. A station that is unknown officially to the ECS governments. A station with the sole purpose of contacting life from galaxies humans don’t know exist. A station called Terminus IV

Orcus Corp has recently received a disturbing distress signal from the Vice Captain of Terminus IV. Orcus is unable to send out their own rescue ships without alerting ECS governments to the stations existence, they contact the Salvation for help

Guests arrive aboard the Salvation as part of the new engineering crew. They are called to the mission room for a briefing with Captain Webb... 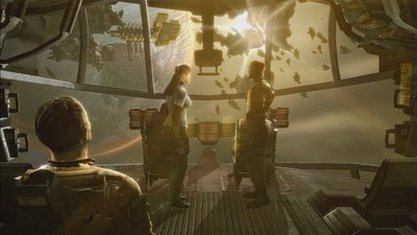 A big inspiration to me for the Simulator segment of the attraction comes from the opening scene from Electronic Arts 2008 game ‘Dead Space’, which does a perfect job of setting the basic story whilst presenting the location for the story – the USG Ishimura – in a dramatic fashion. The simulation in Salvation aims to build up tension in a similar fashion, whilst allowing the guests to see what the exterior of Terminus IV looks like – seeing as they will be spending the next 45 minutes or so there (if they get out alive). A link to the Dead space opening can be found here: http://bit.ly/KWOdbW

“They’re comin’ out of the God Damned walls!”

One of my strongest influences which is painfully obvious is the ‘Alien’ films (Well…the first two films anyway). These films in my opinion are the epitome of Sci-fi horror and both create a strong sense of tension and foreboding which is exactly the mood I wish to create for Salvation. There is a scene in Ridley Scott’s Alien where the Dallas - the captain of the Nostromo- is in the ship’s ventilation system, unfortunately the creature is in the vents with him. The crew can only watch in horror on the ships moving schematics as the creature moves towards Dallas. http://bit.ly/nZxofI This iconic scene has been an inspiration for the ‘Engineer 426’ sequence in Salvation.

The general look for the interior of Terminus IV which guests must navigate will suggest inspiration from the Weyland Yutani colony in ‘Aliens’. Strong evidence of a ‘last stand’ of sorts by the station’s crew with burn marks, blood and slime suggest to the guests something terrible has happened. Low lighting and flickering lights will add to the tension and fool guests into seeing things. 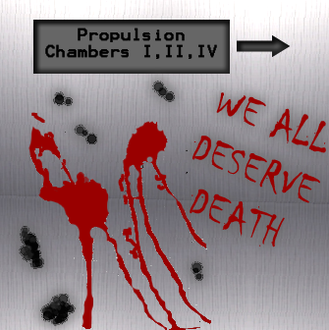 Sound Design
For the purpose of building Salvation as an Independent Property as well as a Brand, the attraction would feature an original music score to be played at certain scenes. The attraction will also use sound ambience to create a strong sense of dread. Whilst tense music can set a mood and build tension, I find some of the scariest films use background noises to make the viewer feel isolated and on edge. Salvation will feature many scenes of ‘clanking’ and rustlings. Guests will be able to hear something crawling around outside the room, scuttling through the ventilation system above guest heads, or just a random bang in the distance. Hissing pipes will also startle guests as they pass through scenes.

Theming
The more detailed the attraction is in its theming, the more believable the world is, and thus the more immersed in an attraction a guest will feel. Whilst Salvation is a guided tour so to speak, an immense amount of detail will be present in the set design to allow the Terminus IV station to tell a story through imagery, props and architecture. In between the main scenes guests will move through various rooms such as living quarters and the medical bay. Belongings of certain crew members will set an image of the various people that live(d) on the doomed space station, post-it notes from one crew member to another will show the relationships that were present on board, and signage around the station will give an indication to the tough life that crew members had on the station. Screens would be present in every room in different locations for Minerva to show her face. This gives the Guests the impression that they are always being watched – even when Minerva isn’t present. The colour scheme will be mainly a variety of chrome colours with marble/brown stone aspects for the Roman influence. There will however be a certain amount of decay in the scenery to show that the station hasn’t been looked after as well as could be with lots of rust in various areas.  The Terminus IV settings as a whole will have a ‘battle damaged’ look about it to suggest that something terrible has happened here, made more eerie by the absence of the crew
Copyright Jonathan Bonner 2012 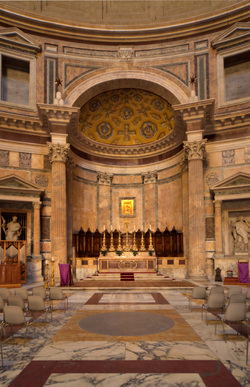 The architecture will be that of how one would imagine a futuristic space station to look, however where Terminus IV differs from those foresights is the Roman architectural influences throughout. Roman pillars will line the walls and sculptures of Orcus Corps CEO Hadrian Wells will be present (especially in the lobby scene – inspired by the Pantheon in Rome – Pictured). The idea is to indicate to guests the delusions of grandeur that Hadrian Wells (named after the Roman Cesar Hadrian – the bloke who built that big wall) had, and his obsession with Roman Mythology. As well as offering a somewhat beautiful entrance to an otherwise, rather cold and unwelcoming Space Station. Other nods towards Roman mythology are the names of the various characters and locations. The AI entity on board the station Minerva is named after the Roman Goddess of wisdom (get it?). The name of the space station Terminus IV is named after the god who protected boundary markers (the ‘IV’ to me means that somewhere there are three other Terminus stations – an idea which excites a dork like me!). And not forgetting the corporation’s name Orcus Corp – named after the lord of the Underworld (why Hadrian would name his company that is something that speaks to me about the kind of bloke he probably is deep down ).